Like many people advocating for ageing parents with cancer, Kimberley found the process overwhelming and somewhat inflexible. Her desire to seek a second opinion for treatment options led her to consult Northern Beaches Cancer Care.

Kimberley’s father Robert, lives in a nursing home in northern Sydney.  A blood transfusion and emergency operation at a nearby hospital heralded a serious prognosis, and when scans revealed bladder cancer, they were given few options for Robert’s future treatment.

However, Kimberley, who advocates for both her parents, had been following the reports from the urology clinic that mentioned radiotherapy as another option. “I’ve never been the sort of person to seek another opinion before,” says Kimberley, “But I did because it was for somebody who is dependent on me in some ways.”

She followed up on referrals from her Dad’s GP. The Christmas break made the task even more difficult, but fortunately, Kimberley contacted Northern Beaches Cancer Care, a radiation oncology facility. “Not only did they look after me, but the fact they also took the time out over the Christmas break to do a Zoom meeting with me – that gave me comfort in itself.”

On arriving at the facility at Frenchs Forest in Sydney, they felt comfortable in the surroundings, recalls Kimberley. “We were greeted at the door on arrival. We didn’t feel like we were in a cold medical facility.”

Aware of the seriousness of Robert’s illness, Kimberley says, “I wasn’t necessarily expecting a good outcome. When I met with Dr Chaudhuri for an initial consultation, I was not sure that we would proceed with radiotherapy because I had lots of question marks: Maybe the travel would be too much? Maybe lying down will be too much? Will he be overwhelmed?”

Dr Chaudhuri and the team at Northern Beaches Cancer Care helped them through the decision. They even provided a ‘trial run’ scan for Robert to help the family decide if he would be a viable candidate for radiotherapy. “He passed that first little test with flying colours,” says Kimberley. “And every other session beyond that. He never resisted going. He was always enthusiastic to be part of the journey.”

The treatment plan was tailored to the needs of Robert, who – like many of the centre’s elderly patients – isn’t particularly mobile. “I feel that Dad’s best interests, his immediate comfort and long-term comfort were always at the forefront of the clinic’s mind,” says Kimberley, “They made a special effort to cater for us.” A six-week treatment course became four weeks for Robert, and Kimberley could accompany him where needed. Kimberley adds, “It was a really frightening time for us, but at the clinic, I never once felt anything but happiness.

Kimberley took her father from the nursing home to the centre for scheduled treatment sessions. “They are very clear about appointment times and doctor follow-ups and what we can expect each day we come. All we had to do is turn up.” Kimberley found the staff could adjust to any changes and says, “I felt comfortable with their problem-solving skills as well.” 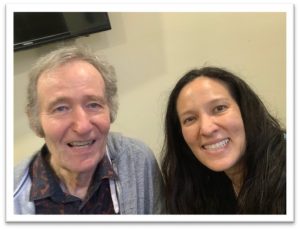 Image: Kimberley and her father, Robert, all smiles with the care they’ve received at Northern Beaches Cancer Care.

Kimberley says she can’t thank all the staff enough for their support and many small incidents of kindness. “Natasha at the centre was amazing. The receptionist Kati, who was also a constant in the journey, was really on top of it. Every time we turned up, we felt like we were visiting family and friends. The Radiation Therapist Stephen went out of his way to help. They played music during treatment and discovered that Dad loves the Beatles – that was a bit of a surprise to us. Nurse Ely also treated Dad like he was part of her family.

Kimberley points out, “As soon as I reached out to the staff, they treated me this way. From the minute I got in touch with Natasha, she was working behind the scenes to give us the quickest action she could and the best care possible.”

While Robert and his family await further scan results, they hope for good luck while trying to moderate expectations. However, Kimberley can already see good outcomes. “The month we spent doing the treatment wasn’t wasted time at all. There were so many benefits in the fact that we actually spent quality time with Dad, investing in his health.”

Kimberley reflects on her part in supporting her father’s cancer journey. “With my particular set of circumstances, I had to be a voice for my father. That really gave me the drive to get a second opinion. I wasn’t necessarily expecting a good outcome. The outcome that we have had so far has definitely been above and beyond expectations!”

She advises others who advocate for their parents during a health crisis, “I would say to anyone in my situation that having hope, having optimism, having a positive mindset will help you to cope. It will arm you very well. Finding a clinic like this one will help your journey be so much better than you would ever imagine.”